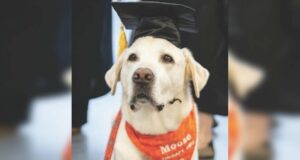 Well, it’s official, there’s at least one more dog out there with a more advanced degree than I have. Moose, an 8-year-old Yellow Lab officially just received his honorary doctorate degree in Veterinary Medicine from Virginia Tech. Yep, just call him Doctor Moose!
Even before receiving his degree, Moose was a pretty big deal on campus. The pup has worked as one of Virginia Tech’s four therapy dogs since 2014.  He attends events like football games and new student orientations. Throughout his time there, Moose also assisted in over 7,500 student counseling sessions. He helps students cope with their anxiety and other mental health issues.
Moose’s dad, licensed counselor Trent Davis, adopted him from Guiding Eyes for the Blind in New York. Davis is the person who launched Virginia Tech’s animal-assisted therapy program. He explained how interacting with a dog can help students who might need but be resistant to therapy: they don’t judge.

“Some humans haven’t had the best experience with other humans, or even other dogs. In both those cases, Moose provides a very safe and comforting force in the room. These students see Moose as someone who’s going to accept them. They don’t worry about him judging them.”

Veterinarians, in particular, have it rough. CDC data confirms that veterinarians are more likely to die by suicide than the general population. Petting Moose really helps struggling future vets at Virginia Tech with their mental health.

“The students here talk a lot about how Moose has broken down the stigma around mental health care on campus. Veterinarians are unfortunately a very challenged population. They have high rates of suicide, and this profession can be quite disturbing. He has really helped the students and staff at Virginia Tech and has gotten a lot of recognition for that.”

So, it’s pretty appropriate Moose graduated with the rest of the Veterinary school.
Dogs like Moose help transcend the barrier between illness and stigma against treating it. He provides a vital service to the university.

“I’ll often meet people and they’ll be petting him, and all of a sudden they’re on the ground, talking in a baby voice. So when people ask, ‘How does this dog therapy thing work?’ I’m like kind of like this. I have never met you before and now you’re sitting one foot away from me petting the dog and talking to me about the meaning of life.”

Working And Graduating Despite His Diagnosis

Moose turned 8 on Feb.13th. Sadly, he was also recently diagnosed with prostatic carcinoma, a type of cancer that affects the genitourinary system. The Virginia Tech Therapy Dog Instagram account shared the news with a note of optimism though.

“It is encouraging that it was caught early and that he has started treatment with the talented oncology specialists @vamdvetmed in Blacksburg and @ethosvethealth in Richmond. Thankfully, Moose is feeling fine and remains in his usual good spirits. He continues to provide healing and support for others every day, as he has his entire life.”