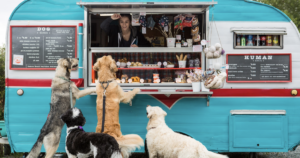 It’s no secret that humans love food trucks. Going outside and getting a delicious meal from a restaurant on wheels is just so exciting. However, it’s an experience that dogs all over the world would love to be a part of too. That’s why Ben and Dawn Ford created Seattle’s first dog food truck called The Seattle Barkery!

The food truck, which they named Buster, is like heaven for any dog. It has a wide selection of snacks for pups, along with a few options for their human companions. Once a dog stops at The Seattle Barkery, they always want to come back for more!

How the Dog Food Truck Came to be

Ben and Dawn started this business because they saw a need for a dog food truck in the Seattle community. They had set up a table at a farmer’s market, but it was not ideal in rainy weather. So, they became envious of the food truck drivers, which gave them the idea for The Seattle Barkery.

“We had zero experience in the food truck world other than being hungry customers,” Ben told iHeartDogs. “My wife, Dawn, cooked up this idea years ago and when the opportunity presented itself in 2014, she convinced me it was now or never!”

It took a while for them to get Buster ready for the job, but all the hard work paid off in the end. It took them 8 months after getting their business license before they were ready for their first event. Every city seemed to handle food trucks differently, so in terms of laws and permits, it was not easy.

Today, the couple couldn’t be happier. As expected, dogs quickly fell in love with the delicious menu. Most of the treats are made in-house to avoid any recalls, and some of their popular treats include mini cheezy donuts, bacon pupcakes, dog ice cream in an edible bowl, and even personalized dog birthday cakes!

All the original menu items were first taste-tested by their picky rescue Pekingese mix named Sherman, so they are guaranteed to be delicious! Sadly, Sherman passed away since then, but his menu lives on!

The Seattle Barkery food truck has seen so much success that they have since expanded to include permanent locations too. First, they created a special Treat Bar at Dogwood Play Park, an indoor dog park and bar for humans. The facility had a kitchen area that they weren’t using, so it seemed like the perfect permanent location for their business.

Then, a year after the Treat Bar opened, they also launched a Treat Trailer. This trailer remains parked outside the Magnuson Off-Leash Park, which is one of the most popular outdoor dog parks in the area. Additionally, they opened up a Treat Shop in downtown Seattle during the coronavirus pandemic. The timing was not ideal, but it has actually been doing well so far.

This business is about so much more than just money though. Ben and Dawn adore meeting all the dogs and seeing how happy their business makes people. They even have a tip jar out, but the money doesn’t go to them. All the money in that jar gets donated to Old Dog Haven, which is a rescue with a “foster hospice” program.

“We typically have two reactions to the truck. The first is by the humans who are bewildered as to what we’re actually selling. Nine times out of ten, you’ll notice the dogs figuring it out quicker than their [parents], with their noses raised high,” said Ben. “We have a lot of regulars, both dogs and humans, especially at the dog parks.”

Dawn said that she has no idea how much further they will expand in the future. However, she is definitely open to expanding even more.

Where to Find the Dog Food Truck

It’s no surprise that dogs adore this food truck. If you get your pup treats from there once, they’ll be sure to pull you back for more. Each location even has a special treat chute, where treats will magically pop out! Once dogs figure out how it works, they will sit near the treat chute, waiting for more. Dawn explained that the rule is one per customer, but dogs can’t read, so many of them get spoiled with two or three instead.

As tasty as the treats are for dogs, there are also plenty of things for humans to enjoy too. Dog parents can get treats for themselves such as coffee or other beverages.

The business started out with just Ben and Dawn, but now they have a team of 8. They have even signed on with Independent Pet Supply, a company that distributes products to pet stores in Washington, Oregon, and Idaho. So, even if you don’t live in Seattle, you can still find some of these delicious snacks in nearby areas too.

If you want your furry friend to experience every dog’s dream, you should visit The Seattle Barkery if you get the chance. You can visit their website and their Facebook page for more details about their permanent locations and where the truck will travel to. Of course, there are also plenty of adorable photos to look at too!