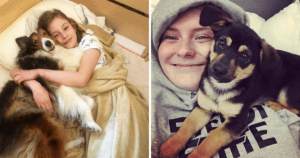 The COVID-19 pandemic happened quickly. Before anyone could process the situation, many places were going into lockdown. This also meant that many flights were canceled. For travelers stuck in different countries, this was especially hard. Plus, it was even harder knowing that their dogs were far away. Kyla and Travis Robinson had spent two years in China. They had been planning to return to their home in Vancouver, Canada, but the pandemic quickly foiled their plans. Many flights were canceled and no dogs were allowed on planes.

Sadly, the family was left with no choice but to fly without their rescue dog Sugar. As the pandemic grew more serious, it became even harder to find accommodations for Sugar. They feared that they wouldn’t be able to bring their sweet dog back to them. But as it turns out, they weren’t the only ones stuck in a difficult situation like this.

The Robinsons created a WeChat group to gather ideas about transporting animals. Before long, five hundred people joined the group because they were struggling with similar situations. There were many dog parents throughout Canada and the United States with dogs stranded in China.

Some of these people had traveled to Canada to visit family, thinking they would be back in China in a few weeks. However, the pandemic caused their dogs to remain stuck at boarding facilities or with sitters. Many of these people were told that they should give their dogs away, but any true dog lover knows that that’s not an option. Dogs are family.

Together, all the families came up with an idea. They would charter a plane from Shanghai to Vancouver and Seattle. This plane would transport dogs and cats back to their families. It would also bring back Americans and Canadians stranded in China. They named this transport “Mission Impawsible”.

“It’s been a whirlwind and definitely never in my wildest dreams did I think that creating a WeChat group was going to lead me here six weeks later,” said Robinson.

Finally, the group secured a flight on July 18th. The flight will have over 155 humans and 110 furry friends. It was made possible by the hundreds of donations they received. The more money they raise, the less money that’ll come out of pocket.

One of the people who’s looking forward to their dog’s return is Kaitlyn Hooper. Hooper flew from China to Ontario after her dad passed away. Then, her mom was diagnosed with lung cancer and passed away not long after. During those dark times, her rescue dog Ted was stuck in China. Like every other family involved, Hooper desperately wanted to see Ted again.

Mission Impawsible has grown greatly since the beginning. It even has its own website, where you can see many of the stories of the dogs that are coming back to their families. There is even an Instagram and a Twitter page dedicated to updates on the flight.

The flight still needs about $20,000 to meet its goal, so if you’d like to help bring these dogs and people home, you can donate on their GoFundMe.