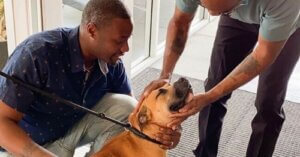 A California fur parent that was left heartbroken after the disappearance of his dog received incredible news that his pup was found alive and well a year later. Though he was thrilled at the thought of seeing his beloved companion again, the logistics of getting him home stood in the way of their reunion.

Derrick Maxwell made his way to an Indianapolis Animal Shelter in 2019 to look for a furry friend to bring home. Struggling with medical issues that often brought him down, he knew the only thing that could help him was the love of a dog! After locking eyes with Kodak, he knew he was the perfect pup for him.

Derrick and Kodak formed an incredible bond in the time they spent together after his adoption. Kodak offered him the emotional support he so desperately needed, making the upcoming events even more heartbreaking.

A neighbor’s unfortunate mistake caused Derrick’s entire world to come crashing down. Kodak managed to escape through the front door when a neighbor accidentally let him out, causing Kodak to bolt. Derrick spent weeks searching for him with no success, finally giving up hope after countless search efforts.

Months went by without any sign of Kodak, forcing Derrick to move on. He then picked up his life and moved to California, where he would receive the birthday present of a lifetime over 1 year later!

Derrick woke up on the morning of his birthday with an email from the microchip company called Home Again. Kodak had been found in a city about an hour away from his hometown, and he was alive and well! Though Derrick was overjoyed at the thought of reuniting with his best friend, that joy was soon clouded by the difficulties of bringing him home.

Because Kodak was on the other side of the country, Derrick had to arrange some form of transport to get him home. After being denied flight transport by multiple airlines due to him being a Pit Bull Mix, the only option left was a $5,000 transport service. Unable to come up with that money suddenly, Derrick was afraid that their reunion was out of reach. That’s when the ASPCA Relocation Team reached out to Pet Rescue Pilots and saved the day!

Pet Rescue Pilots is a nonprofit organization that flies adoptable pets from crowded shelters to parts of the country with a higher adoption rate. Once the owner of the organization, Julian Javor, heard about Kodak’s predicament, he knew he had to step in and offer his help! With additional funding from the ASPCA, they were able to arrange a rescue flight to reunite the long-lost pair.

Within days, Kodak was taking off with the Pet Rescue Pilot on the 2,000 mile journey to California! From the moment Kodak touched down and saw his dad again, it was as if he couldn’t possibly give him enough kisses! Kodak was home, and the two couldn’t be any happier.

“I just want to know, if I could get inside of his head. What happened? And I just want him to know that I never gave up on him.” – Derrick Maxwell

This week’s rescue trip to Kansas City came with a very special story. Please enjoy this wonderful coverage from @ktla5news and @kaceymontoya that details Kodak’s 2,000 mile journey to being reunited with his family after being missing for over a year. From Missouri to Los Angeles, CA Pet Rescue Pilots is incredibly honored to have flown Kodak back home to his loving family and to have been a part of his story. Maxwell, Lloyd and Kodak, we wish you nothing but the happiest days ahead now that your family is back together! Pet Rescue Pilots soars on the wings of your generosity and is taking to the skies again this Saturday June 27th to fly 20+ dogs and cats out of CA shelters and into foster homes in Washington State!

This reunion wouldn’t have been possible without the help of a microchip. This is an incredible reminder of just how important it is to microchip your furry friend, as you never know what could happen!

The post Pilot Flies Across Country To Reunite Lost Dog With His Family appeared first on iHeartDogs.com.