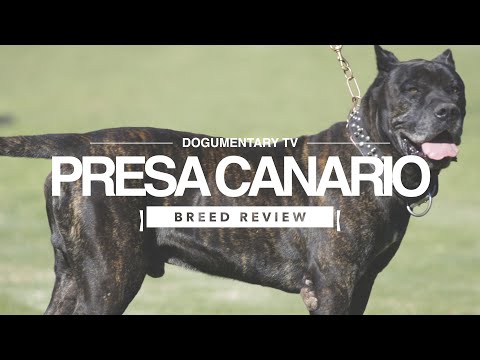 The Presa Canario has a powerful, square head that is nearly as wide as it is long. The muzzle is broad. The chest is deep and broad. The rump is slightly raised. This breed has thick skin, dense bones, powerful muscles and a massive head with a large jaw. The ears are usually cropped. Colors include fawn and various brindles; white markings are sometimes seen.

The Presa Canario’s ancestry probably includes the now extinct naive and indigenous Bardino Majero crossed with imported English Mastiffs. It was developed in the Canary Islands in the 1800s as a farm utility dog. The Canary Island was named after the dog. It was a catch dog that caught unruly cattle and wild boars. It was used to protect the livestock from wild predators and humans. Later it was used for a brief period in time as a dog fighter by bored farmers for entertainment. Dog fighting was later outlawed and other dogs became more popular. But there were some farmers that continued to keep the breed and work them as a farm dog.