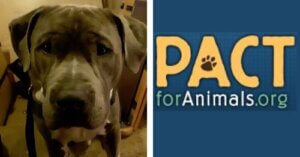 Sometimes current military or veteran pet parents need extra assistance with their pets when life throws them curveballs. With the dedication that these men and women serving our country have, it’s only right that dedicated animal lovers come together to offer support when they need it!

A rescued Pit Bull named Floyd found a forever family in the care of a veteran named Joshua. Floyd came into his life at a time he so desperately needed help, offering him the companionship that only a dog could. Though Joshua was struggling with a severe injury and crippling PTSD as a result of his time in the military, Joshua always knew he had Floyd by his side to help him through. With how close this pair became, the unexpected events that would soon unfold left Joshua racing to find a solution for his best canine friend.

Joshua was battling a chronic injury that would bring his life to a screeching halt. He was informed that he needed immediate surgery to repair the long-term damage his injury caused, or he would be paralyzed within the week.  Though he knew he had no choice but to undergo the surgery, he didn’t have anyone that could care for Floyd in his absence. Thankfully for Pretty Boy Floyd and his dad, Pets & Vets and PACT For Animals came to the rescue.

“PACT For Animals gives peace of mind to hospital patients and military personnel throughout the US, by placing their pets in temporary foster homes until their owners can be reunited with the companion animals they love.” – PACT For Animals

Thanks to the help of GreaterGood.org and the kind donations from the iHeartDogs community, PACT helped Floyd find the assistance he needed to prevent him from being separated from his dad. PACT was able to find a comfortable boarding facility for the duration of the surgery and hospital stay Joshua required, allowing the two to be reunited once he was fully recovered!

“He thanked us for all of our help and told us that if it weren’t for our program he would have had to surrender Floyd in order to get his life saving surgery. He told us that he has had Floyd since he was five weeks old (he’s now almost 3) and the thought of losing him was terrifying. Less than 24 hours later, Joshua and his pup were reunited, there were plenty of puppy kisses to go around.” – PACT For Animals

Veterans and military personnel like Joshua would not continue to have happy endings like this if it weren’t for kind animal lovers like you! We’re so happy Floyd and his dad were able to remain in each other’s lives, and hope Joshua is having a speedy recovery!

The post You Helped This Pup Find Assistance When His Veteran Dad Needed Surgery appeared first on iHeartDogs.com.