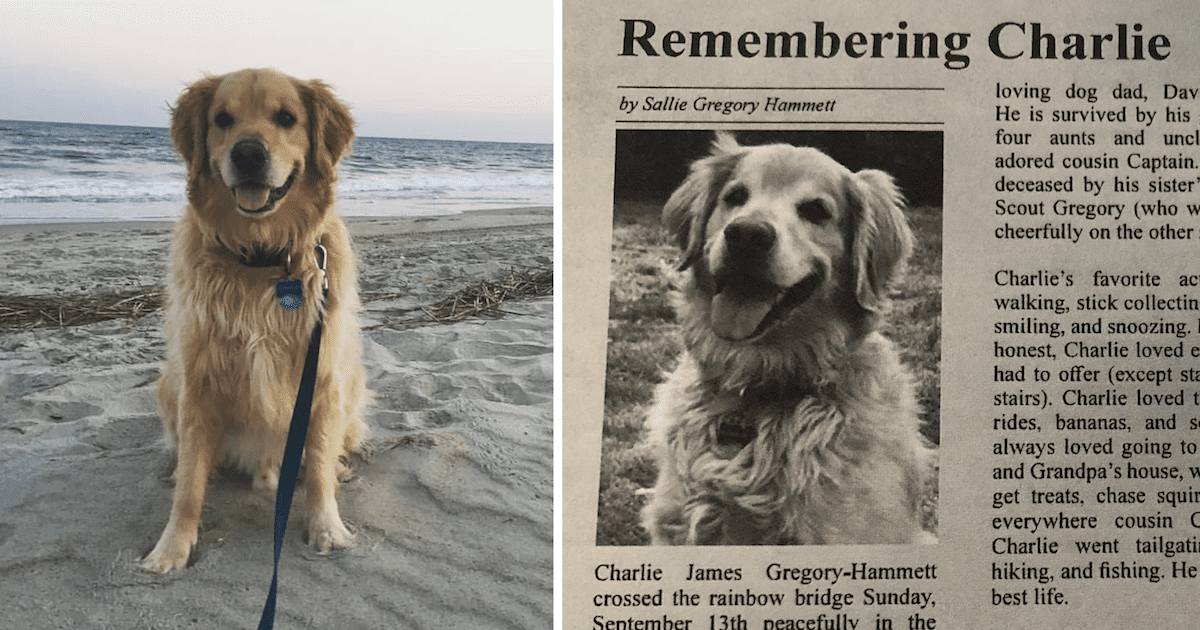 Sallie Gregory Hammett and Charlie the Golden Retriever were inseparable. They even found ways to go to work and run errands together. Hammett said that he was her “right-hand man” and “just the happiest dog.”

But sadly, Charlie’s life ended far too soon. He passed away at 7 years old after a 5-month battle with lymphoma. Hammett was devastated, but she knew Charlie would want her to stay positive. So, she took the time to write him a heartwarming obituary. But little did she know, it would soon go viral.

Hammett and Charlie’s friendship started when Hammett was 23 and living in a new city. She needed someone she could experience the world with, and she knew Charlie would be perfect for that role. They went hiking and traveling together, and Charlie was even right by her side for her wedding day.

So, when Charlie passed, Hammett knew she had to do something special for him. She’s always loved writing, so she realized that an obituary would be perfect. She used it as a chance to reflect on all the good moments she had with Charlie. That included all his quirks, likes, and dislikes.

She even made it look like a real obituary, designed like a newspaper page. There’s no doubt that Charlie would’ve adored it.

“Charlie’s favorite activities were walking, stick collecting, swimming, smiling, and snoozing. If we’re being honest, Charlie loved everything life had to offer (except stairs. He hated stairs.) Charlie loved the beach, car rides, bananas, and socks,” Hammett continued. “Charlie always loved going to his Grandma and Grandpa’s house, where he could get treats, chase squirrels, and pee everywhere cousin Captain peed.”

Hammett initially wanted to publish the obituary in the local newspaper, but the price was more than she expected. So, she shared it on Twitter instead. To her surprise, thousands of people were moved by her writing, and many could relate to her loss. She felt so comforted during this difficult time.

Many people commented sharing stories of their own dogs. Even though many of them never met Charlie, they missed him deeply, and they wanted to do everything they could to comfort Hammett.

“The likes are awesome but the best part has been all of the replies,” Hammett said in a follow-up post. “Reading about everyone else’s special doggos, and all the people that say they loved Charlie even though they never met him. It’s just been so comforting – it makes me feel less alone and just flooded with love.”

Hammett encourages all the supporters to give their dogs some extra love in Charlie’s honor. After all, we need to shower our dogs with as much love as possible while they’re still with us.