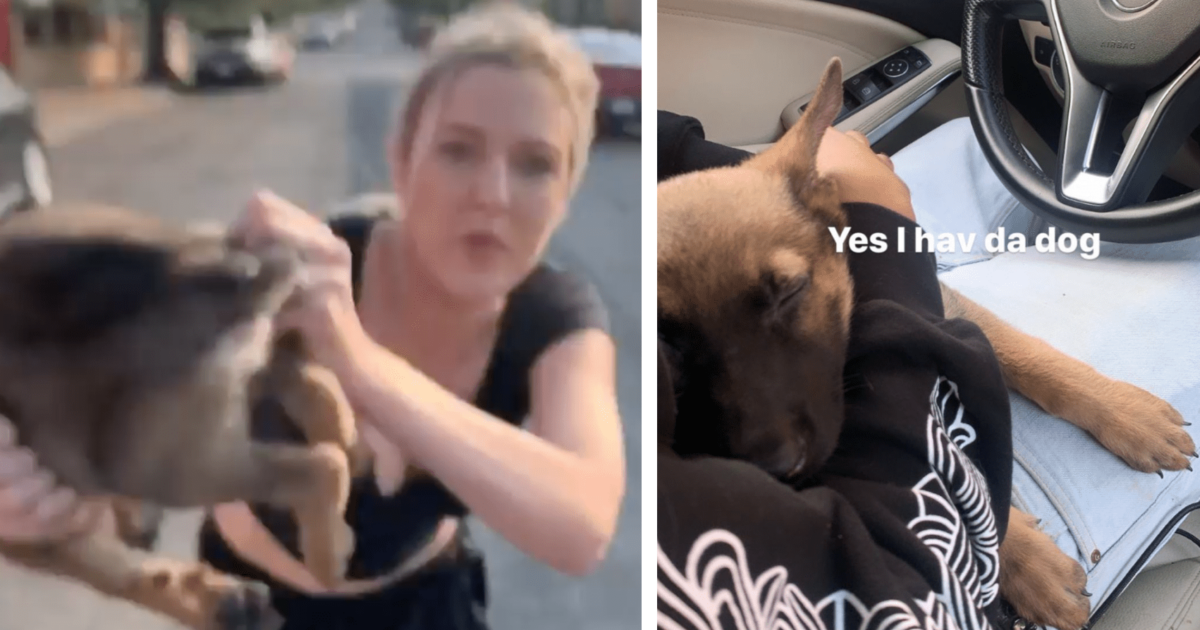 When everyone has a video-capable device on them at all times, we end up seeing a lot of insane things captured on film. It seems like every day someone goes on a public rant about receiving the wrong latte or a dispute between neighbors makes the internet rounds. Here’s one I’ve definitely never seen the likes of before.

An upsetting video captured by Twitter and Instagram user @Mulaflare shows an angry, hardly coherent woman harassing him. Throughout the video, the woman escalates from verbal attacks and racial slurs to physical assault. Even more disturbing: the entire time she attempts to assault the driver, the woman holds a small Malinois mix under her arm.

Given that she slurs her words, many have guessed that she may have been under the influence at the time. She behaves aggressively and erratically. For a large part of the video, the woman follows around the man filming her, insulting and hassling him while still holding the dog. Then comes a different kind of horror altogether: She literally throws the dog at the man!

As we know dogs don’t possess the cat-like ability to land on their feet, this helpless pup landed right on her back.

Once she scrambled to her feet, the poor confused puppy ran right under her attempted target’s legs.

Since the video ends after this, the immediate aftermath is not clear. What we do know, however, is that the puppy is now safe and away from her abuser.

The entire video is here, but be warned it’s very disturbing.

A Happy Ending To A Bizarre Story

Because the story originated from a viral social media post, some more concrete details are missing. According to @MulaFlare though, he now has the dog under his care. Her new name is “Movie.”

The original poster created a GoFundMe to help cover the costs of care for the puppy. He also shared a few photos, and it seems like the puppy is in much better hands.

At the very least, Movie is safe and content. She now has her own Instagram page detailing the start of her new life.

Obviously, this dog’s former owner is not well, or wasn’t at the time, though details remain fuzzy. However, it shouldn’t need to be said that disputes between human beings should never involve dog abuse.

If you witness an incident of abuse against an animal, contact the proper authorities before attempting to control the situation yourself.